Fake it ‘til you make it

Rising to the challenge forces us to grow, and this growth builds up credibility with ourselves and others – but to get started you might have to fabricate a few facts along the way.

Challenges, monumental and menial, confront us constantly. Tasks from previous weeks linger, waiting to be accomplished, while new projects stack up and deadlines loom. Sometimes this means quick decisions must be made about what gets neglected so that something else can get accomplished. These are the public and private moments when we are faced with no alternative but to try even when it seems like we can’t succeed.

For such moments, English makes use of some great phrases: “Grab the bull by the horns”, “when the only way around something is through it”, or “when going gets tough, the tough get going”. These fun sayings express that even if a situation seems hopeless, perseverance brings success. But they also imply that you already have everything you need to do what needs to be done. What happens when the job requires more of us than we believe we can give?

My dad loves to tell a story about his youth, when he was eager and desperate for work. He had applied to every open position regardless of his academic or professional background and was finally called in for an interview. Determined to land the job, he said “Yes, of course I can do that” to every question about skill and competency he said. Later that evening he went home and told my mom, “The good news is I got the job and I start in two weeks; the bad news is I only have two weeks to figure out how to do everything I said I could do.” In short, he had to “fake it until he made it”.

Attempting to be successful at something involves a certain amount of trust. My high school coach loves the phrase, “believe to achieve.” But in the case of “faking it”, trusting that you can do something also requires a certain amount of deceit –even if you can’t right now, act as if you can. Yes, my dad outright lied during his interview. But with a wife and three babies at home, he did everything necessary to learn the programs and processes the job required – very often ignoring what was true about his limited skillset, until the truth became that he was skilful.

Like taking part in a play, his role required some acting. He pretended like he was qualified with the goal of becoming qualified. Those first weeks and months on the job, he probably felt as if the curtain would fall at any moment and he would be exposed as a fraud. But there was a process underway, one which gradually replaced inexperience with experience, doubt with confidence and ability.

I don’t know what challenges you are facing or what awkward and difficult situations you find yourself in. No matter who isolated you may feel: you are not alone. Each of us harbors the fear that at some point someone will discover the truth about ourselves; the fear that in the trial we will encounter our true selves and that that self is weak. The way through this anxiety is with courage, and very often this courage comes after, not before, we engage with each other.

The struggle is real; so fake it 'til you make it. 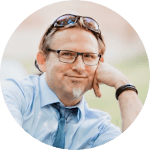