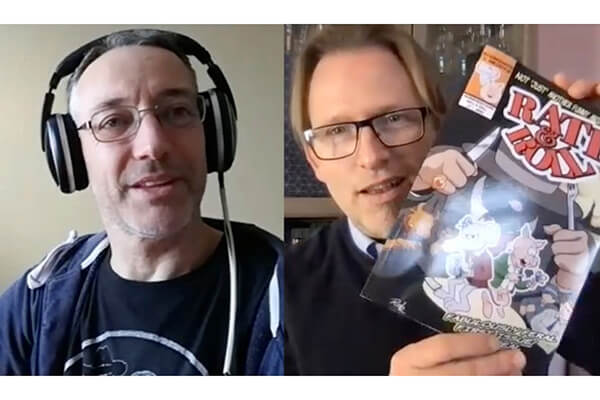 Rob Price works as a freelance English trainer with us and is also a cartoonist who has recently published a comic tale of migrants to New York. I bought a copy for crossXculture and invited Rob for an interview. Here is the excerpt:

Karsten: I was really fascinated when you said you were into drawing and cartooning. I read “Ratl & Roll” and was impressed with your craft. I thought, surely other people would like to know what this is about.

Rob: It’s a fun read. It’s a comic, a 24-page beginning of a story, and my plan is to have at least 5 issues. I’m actually working on the second issue now.

K: How should we imagine the start of this? There was a history, a development behind “Ratl & Roll” – a younger you, who embarked on this road. What was the road like?

R: Ratl & Roll is only a very recent development but my love of reading and making comics started a long time ago. My mum taught me to read, and I was reading for myself when I was 4 years old. I grew up with comics, and I think comics are a great way to encourage kids to read. And, of course, I started at some point copying and trying to emulate what I was seeing on the pages, and I did that for years.

K: Are comics for kids? I remember reading Walt Disney hardcover comics until I was perhaps 15. Those were funny stories for kids, but “Ratl & Roll” is not “funny” per se.

R: Comic can mean two things: a person trained as a comedian, and a comic strip. When I was younger, I would read the humorous comics: The Beano, Cheeky Weekly, Whizzer and Chips, Whoopee! etc… At some point, I started getting Mickey Mouse Weekly. But I continued to read British humorous comics until I was about 16, as well as 2000ad, a science fiction based comic which I still sometimes read.

Comics in 1970s Britain were pretty different to comics in today’s world, because we had such variety. They were cheap, printed on newsprint, and anybody could afford them. And it makes me sad, that today’s state of comics is not comparable. Today, comics come with a gift to entice kids to want to buy them, and are displayed on supermarket shelves, sealed in plastic.

In the 80s and 90s, a lot of British agents started working for US comics, like Marvel, and other publishing companies such as Impact and Dark Horse. Then, Alan Moore and Dave Gibbons released Watchmen. It was first released as single issues and then again later as a compiled album with twenty something copies in it, re-released as a bound version. And this was pretty much the start of the graphic novel movement. Comics had grown up. And I think there’s an amount of seriousness when you put something in hardback.

At some point, when I have released enough “Ratl & Roll” issues there is always the possibility of re-releasing them as one hardbound edition. If this happens, it would be termed a ‘graphic novel’. So, to your question: They can be for kids, but it is not a definite ‘yes’. There are comics for little kids and comics for older kids.

K: How do you get from a single picture to a comic?

R: That’s a good question, because comics are just that: a single picture, realized and described as sequential art. It’s a very visual and highly affordable form of video – anything from 6 to 9 frames per page, depending on how fast you read. And the great thing about comics is that, unlike movies and television back in the day, you can purchase comics once and read them over and over.

K: How did you start out drawing comics? Did you have stories in mind or was it more about the pictures?

R: Basically, it started with just drawing. I remember some of the stuff I drew was simplistic, and really was more like a picture rather than a comic panel. Over time, my art developed, as I copied comics that I liked. And that in itself is an education, because I could see what other artists were doing while I was teaching myself to draw.

K: So, the beginning was basically taking a comic that already existed, opening a page, and recreating an exact copy?

R: Sometimes it was exact, sometimes it was a matter of taking characters that I knew and making them do and say the things I wanted them to say. I enjoyed the stories I was reading, of course, but by using my imagination, the possibilities were endless.

K: Your skills are woven into “Ratl & Roll” on so many levels: as both cartoonist and story-teller, you guide and shape the reader’s experience.

R: And I’m showing them other things the way in which I see them.

K: How long has it taken you to reach this point?

R: “Ratl & Roll” is a short part of a long journey. Drawing comic strips is the one thing that I’ve always wanted to do. I had another idea in the back of my mind since I was 18, but for the longest time nothing ever became of it. After working as a graphic designer in a print copy shop made me dispirited because I was only doing the stuff that I had to do.

It was at this time that I started learning foreign languages for myself and not for school, especially German, French, and Spanish and even Cantonese, and after that, I began travelling and teaching in Korea and Taiwan. I didn’t spend so much time on drawing, and I didn’t have the drive I’d had as a kid. Then I came to Germany mainly to study – that took a number of semesters – and suddenly it was 2015 already, and I hadn’t put together my first comic yet.

I think it was about 2016, when I entered a competition for the comic magazine “2000 AD”, and I actually travelled all the way to Leeds. I met a whole ton of people, whose names I knew, because I’d been reading their comics, and I did get some good feedback. John Wagner is an accomplished British comic writer, and he looked at it and said: ‘You can tell a story,’ and that’s encouraging to hear from somebody like that. I knew that my work could be even better.

K: Basically, this is your art coming together on different levels, including your understanding of history.

R: It is New York, but it isn’t now, and I wanted people to have a feeling that this is something that happened a long time ago.

K: It struck very close to home with me, because New York is where I had lived for many years. And “Ratl & Roll” does say something about the American way of seeing and doing things. Is this a political statement you’re making?

R: I think “Ratl & Roll” is politically relevant, because of the whole immigrant situation, not only in the US, but also in the UK and Europe. Immigrants are in the hope that life will be better elsewhere, so they make a move for it. And at the very heart of it, what can I say but that I am an immigrant myself.

K: There is also the idea that this can either go well or poorly; one fears with the characters and wants them to do well.

R: Well, it wouldn’t be a good story otherwise.

K: Is there a reason why these animals are also immigrants?

R: Well, actually, the way I have it, is that Roll -- who we only learn about in the final pages of Issue 1 – is actually American-born. He’s got a whole backstory, and the way I see him is that he’s not stupid, but he’s a little bit naïve – which is something that Ratl takes advantage of.

K: What made it an interesting read for me was there was almost a sensation of realism that had me fascinated, and there was also this idea of following characters who are obviously not like me, because they look different. But I could still go into and out of these characters that had to do with life in general and your take on it interested me.

R: One thing I’ve learned and noticed from this process is that sometimes what I see is not definitely what everyone else will see. For me, “Ratl & Roll” will be what I’ve wanted to accomplish as a comic. It’s a classic story of the underdog. Ratl is in dangerous situations with people who are much bigger than himself and much more dangerous than himself. And you know he’s bad, but you still want him to beat the odds, to survive. Roll, I haven’t completely introduced, but his time is coming; there’ll be more about Roll in Issues 2 and 3.

K: It has been interesting being taken on this journey. You’ve brought me into a space that is not my own life, but one that I could escape into for a while. A world that is disconnected in terms of time and possibilities, but the feelings that I had during the read were very real. And that was cool to experience. Thank you for this interview. 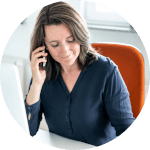