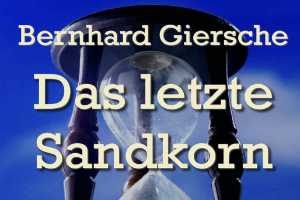 The Last Grain of Sand — by Bernhard Giersche

In one of our English lessons a participant was asked to write a short summary of a novel she had read. I was quite surprised by the story Siggi presented to us. Check this out:

“You have 10 days to save the world. Otherwise I will erase the world along with everyone in it. I will give you 10 days and 10 nights, and I am giving this message only to you, in order to save the world. Use the time wisely, or die with all of mankind.” — The catch, however, is that God sends this message to all the people of the world individually and simultaneously. Therefore, everyone has the perception that he or she is the “chosen one”. And chaos begins.

Everyone has their own explanation for the reason behind God’s anger. And because of the thinking that each one is the only individual being sent on this mission, 7 billion humans set out to destroy evil. Within minutes, governments break down, religious leaders are murdered, and even ordinary people are killed in the streets. Neighbours are killing each other for multiple reasons. Water, electricity, and communication networks collapse.

And this is where the story begins.

After the great apocalyptic scenes, the reader follows the destinies of seven people. The first character is Adam, who is also the narrator. In the midst of all the turmoil, he finds a baby whose mother has been killed. The baby cries out aloud, and its face turns red. Due to this, Adam names it “Tomato”. From this moment on they travel together.

The second person is Brigitta Becker. She is blind, and for this reason, she thinks that she cannot save the world. While she is attempting to escape from a killing field, she runs into Fred Lindner, an angry and unattractive man who has escaped from the psychiatric ward of a forensic hospital. But since Brigitta is blind, she cannot see that Fred is not a handsome man. After a while, with Brigitta, Freds anger lessens. He has never had a girlfriend, but in this situation, at the side of this blind girl, he falls in love. And Brigitta is starting to feel the same.

We then become acquainted with Laurenz Beck, a bank manager. His chosen path to appease his God and save mankind is not beneficial for anyone else. He has declared himself the leader over some men who elect to kill victims and thereby rid the world of evil. We then meet Evelyn and the pensioners Gregor and Agnes who complete the team.

These seven souls randomly stumble upon one another at a campground. None of them understand what is really happening. By talking to each other, they find out that each one has received the same message from God. The result is that they manage to stay calm while the rest of the world is running amok. It seems they only have to stick it out long enough, for the others to have killed themselves and can afterward begin a new era.

While the reader is spending the time getting to know the characters more deeply, the ten days are slowly coming to an end. But will there be an eleventh day?

cXc | crossXculture
Good news for you.