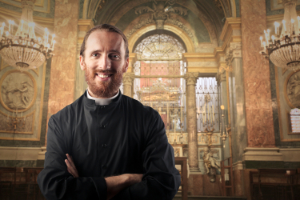 I have a confession to make

In English, ‘confession’ has multiple meanings: a formal statement admitting that one is guilty of a crime (Geständnis); an acknowledgement that one has done something shameful or embarrassing; (Eingeständnis); a formal admission of one’s sins with repentance and desire for absolution (Beichte); a statement setting out essential religious doctrine (Bekenntnis). So which one do I mean?

“O Lord, open thou our lips and our mouth shall shew forth thy praise”— Liturgy of the Hours

In 2018, I ended a decade of deliberation and “crossed the Tiber” entering into full communion with the Roman Catholic Church. Since I wanted the Mass to be celebrated in my native English, I obtained permission from my diocese to have my Confirmation [Firmung] and First Communion [Erstkommunion] celebrated in England where I had been a visiting graduate student. My confessor in London, whom I had made aware of my language difficulties, made me promise that I would live a life of good standing with the Church and make every effort to regularly receive the Sacrament of Penance. In the Odenwald, which I now call home, priests speak a variety of languages, but typically not English. However, baring my soul in German proved so difficult that I began avoiding Confession, and consequently the Eucharist. I was feeling hard-pressed to keep my promise.

Eventually, the weight of my guilt compelled me to action. One day, while heading home from work, it dawned on me that I might have better chances of speaking English in a larger city. I googled churches near me and found the Liebfrauenkirche [The Church of Our Lady] in downtown Frankfurt. When I arrived, I timidly found my way in, feeling more like an intruder than one of the faithful. To my relief, I saw the other penitents lined up, their faces calm and introspective, waiting for their turn to speak to the on-duty priest. In hushed voices, I heard a variety of languages, and none of them were English or even German. The knowledge that I was amongst other foreigners put my mind at ease, assuming that, like me, they were hoping to confess in their native language.

When my turn finally came, I promptly sat down in the booth and said something like, “Verzeih’ mir, Father, ich habe gesündigt – and is it possible to speak in English?” The priest sat up a little straighter, raised his head slightly, and in heavily accented English responded, “Yes. Go on.” After I recounted my sins and their frequency, he asked some clarifying questions and then offered some advice. His grammar indicated that he had some working knowledge of English, although, some important vocabulary was lacking. Based on the context, I was able to provide him with the missing words, and I did so gently. “I need better English” he stated apologetically, true to the stereotype that Germans are quick to berate their skills no matter how proficient. At that time, it did not occur to me that I might be the one who could teach him.

Recently, however, we have been actively expanding our language offering at crossXculture. And I remembered my experience at Confession. It suddenly seemed obvious that my combined experience of language training and graduate study in theology could be very useful to the church communities here in Germany in addressing their non-German constituents. Language is the most powerful tool in the spreading of the faith, because after all, “faith comes by hearing (Rom 10:17).”

There is an immense amount of philosophical and theological materials originally published in English, not even counting the growing number of English language translations that are added to the canon on a daily basis. The growing role of English for the world wide web has contributed to the speed of this trend. Read our article Lingua Franca—Frankly Speaking here. Regardless of a person’s country of origin and mother tongue, most non-native speakers of English will find it challenging, even overwhelming, to read such materials in English. After all, these often specialized and technical texts are not meant for those who possess a limited command of English. And unless the work is specifically geared towards beginners, the assumption is that the reader already has a strong grasp or prerequisite knowledge of the content. Speaking presents a similar challenge even for those with intermediate-level English skills, as it was with my Frankfurt priest. Philosophical and theological English is loaded with its own nuances, particularities, phrases, and terms. For instance, what if I asked you to explain the differences between ‘mercy’ and ‘grace’? Is an ‘ordinance’ the same thing as a ‘sacrament’? Or how about clarifying the ‘substitute’ in the arguments of substitutionary atonement and penal substitution? In metaphysics and philosophy, what is an ‘accident’?

Our courses of English for Philosophy, Theology, and Ministry have a special mission: to equip English learners with the language skills they need to perform their roles and do their work, be it academic, practical, or both. Each of the specializations offer pertinent instruction and relevant exercises with the goal of building confidence, increasing competence, and deepening comprehension in English. Armed with these tools, you will gain entrance into a wider world beyond your native language, as you journey on your way to becoming “a person of all seasons (Ecc 3:15)” and “all things to all people (1 Cor 9:22).” I look forward to seeing you — Landon

crossXculture.com
Good news for you