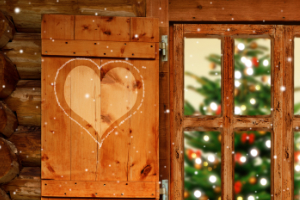 Ä Tännschen, please! — stems from a famous German joke, claiming that this is how the inhabitants of Saxonia purchase their Christmas tree. In their local dialect this is referred to as Tännschen.

There is hardly a symbol more German than the myth-enshrouded Christmas tree. But how did it come about that an ordinary fir from the forest has managed to receive such wide-spread attention, first within Germany and subsequently all over the world?

Trees have played a significant role in Christian religion from the very beginning. In the Old Testament, Eve plucks a fruit from the forbidden tree of knowledge and hands it to Adam. Although this action leads to their expulsion from paradise, it is also the start of an independent life for the two of them. Trees also play a symbolic role in the Quran. Thus Maryam (Arabic for Mary), seized by labor pains, leans against a shade-giving palm tree and gives birth to Isa (Arabic for Jesus).

For the pagan populations of Western Europe, evergreen plants were a symbol of the enduring magic of life during the cold and dark winter months. Around the time of the winter solstice, these tribes carried green branches into their dwellings to celebrate the cyclical rebirth of life and light. The origin of the Christ Tree (Christbaum) is attributed to St Boniface, who was to become bishop of Mainz. During the 15th century, the Church finally linked the symbolism of the biblical 'Tree of Life' with the pagan symbol of rebirth and endurance during the winter solstice.

The world's first mention of decorated firs being used as Christmas trees is from Strasbourg in the early 16th century. Over a short span of 50 years, the tradition spread within Germany and Europe. By the end of the 19th century, the Christmas tree had become an integral part of German culture, delighting people of many denominations during the dark weeks of winter. German emigrants also carried the custom to America so that, in 1891, a Christmas tree decorated the White House in Washington for the first time.

The fascination of the coniferous tree at Christmas time is that it does not shed its needles, while many other trees already look rather bleak. The ability of firs to survive the cold season unscathed gives us hope that we, too, are able to survive in dark times. We decorate our tree and hang friendly lights on it, and we spend our time in the coziness and shelter of our families, reminding us that each one of us plays a role in the recurring circle of life.

We wish you a Merry Christmas!

crossXculture.com
Good news for you.